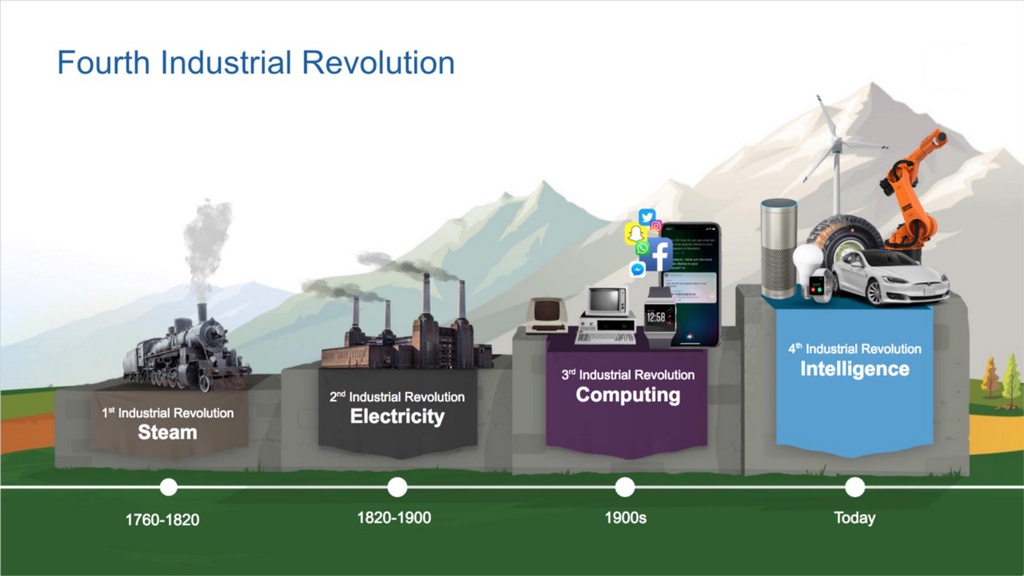 The Fourth Industrial Revolution, also known as the Second Machine Age, is fundamentally changing each and every aspect of our life. To understand why, first consider the three industrial revolutions to come before it.

The First Industrial Revolution changed human life drastically, with more created in the last 250+ years than in the previous 2,500+ years of known human history.

The First Industrial Revolution was a fundamental change in the way goods were produced, from human labor to machines. This led to more efficient means and higher levels of production, triggering far-reaching changes to industrialized societies. This First Industrial Revolution started largely in the United Kingdom during the last quarter of the 18th Century and included:  harnessing steam power, mechanization of the textile industry, transportation (trains and trams) and communication (telegraph, telephone and radio) and the birth of the modern factory. Machines began to replace the need for humans in agriculture and manufacturing.

The Second Industrial Revolution, also known as the Technological Revolution, was a phase of the larger Industrial Revolution corresponding to the latter half of the 19th century up until World War I. It is considered to have begun with Bessemer steel in the 1860s and culminated in mass production and the production line, improving workflow and scientific management. The Second Industrial Revolution was driven by electricity, a cluster of Inventions, internal combustion engines, the aeroplane and moving pictures. Increased mechanization of industry and improvements to labor efficiency increased the productivity of factories while undercutting the need for skilled labor.

The first two industrial revolutions made people richer and more urban. The Third Industrial Revolution made life and manufacturing go digital. The Third Industrial Revolution included digital technology, personal computing, internet and mass customization. According to the Economist the Third Industrial Revolution is known for a number of remarkable technologies that converged: clever software, novel materials, more dexterous robots, new processes (notably three-dimensional printing) and a whole range of web-based services. The factory of the past was based on producing identical products: Ford famously said that car buyers could have any color they liked, as long as it was black. Today factories focus on mass customization, using new and lighter materials that are stronger and more durable than the old ones. New techniques shape engineering, and the internet allows ever more designers to collaborate on new products.

Factories are no longer full of grimy machines manned by men in oily overalls. Many are squeaky clean and almost deserted. Most jobs are no longer on the factory floor but in the offices nearby, full of designers, engineers, IT specialists, logistics experts, marketing staff and other professionals. Manufacturing jobs require more skills, and dull repetitive tasks have become almost obsolete.

The Third Industrial Revolution did not only affect how things are made, but also where. Labor costs are growing less and less important: Offshore production is increasingly moving back to rich countries not because Chinese wages are rising, but because companies now want to be closer to their customers so that they can respond more quickly to changes in demand and customization.

The lines between manufacturing and services are blurring. Rolls-Royce no longer sells jet engines; it sells the hours that each engine is actually thrusting an aero plane through the sky.

Professor Klaus Schwab, founder and executive chairman of the World Economic Forum and author of The Fourth Industrial Revolution, says the lines between the physical, digital, and biological spheres are getting blurred in the Fourth Industrial Revolution. The revolution is disrupting almost every industry in every country. The “breadth and depth of these changes herald the transformation of entire systems of production, management, and governance.”

The Fourth Industrial Revolution does not only change what we are doing but it also changes us. We need new economic models and a value shift. It changes the way we collaborate on every level of society and civilization. It will fundamentally alter the way we live, work, and relate to one another, how we generate, supply, and move energy around and interact with machines. Millions of traditional jobs may be lost to technology and robots, but with new education and innovation, millions more will be created. The Fourth Industrial Revolution (and how we respond to it) will lead to better productivity, improved safety, reliability, and quality.

For manufacturers this means real time factory and enterprise level insights, zooming in on granular levels of the supply chain with high-tech sensors. These sensors securely enable virtual tracking of assets, processes, resources and products to optimize and automate supply and demand. As more manufacturers employ smart processes into workflows the amount of waste, energy, and unplanned downtime is forecasted to decrease.

None of this will be possible without the correct maintenance response

John Moubray wrote about the Third Generation Maintenance in his book Reliability-centered Maintenance (RCMII – Second Edition) where he explained the Growing Expectations of Maintenance, The Changing Views of Equipment Failure and Changing Maintenance Techniques.

KTT is authorized dealer of ADASH in Vietnam market.